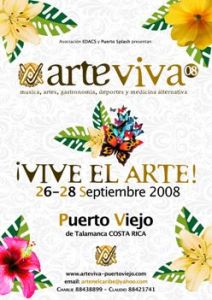 There was an art festival scheduled for Puerto Viejo last weekend. The posters were printed, musical groups were hired, and reservations at hotels and cabins made by countless people from the Central Valley.

The Arts Festival was supposed to celebrate,well… The Arts. What that means here in Talamanca is a bit nebulous, though. The fliers said there would be live music, “Arts”, and “discussions and workshops about Alternative Medicine.”

According to the poster I saw the other day, the events started on the Wednesday prior to the weekend. Mostly it listed the musical groups playing at various bars throughout the area. There was mentioned an arts display on Saturday and Sunday, one basketball game, and one Indigenous dance on Saturday during the day, but the rest of the five-day “Arts Festival” happened at night. In bars. Music.

In fact, this area is famous for its partying. It’s a beach town. It’s a Caribbean beach town, and it’s wide freaking open. Don’t get me wrong. I love music and I love Reggae in particular, but this place is so totally out of control as to warrant an inforced police curfew.

In the past two weeks the English speaking newspaper, The Tico Times, carried frontpage spreads on the ever-increasing violence here. The murders and other criminal activities have been on a climb that would make Wall Street slack jawed with envy.

We can’t take it any more!

The police complained to the municipality that they have only four officers on duty and one motorcycle. No plans were made to increase their numbers for security. The police are unable to control the area in non-arts environment, much less with an influx of revelers here to drink, do drugs, and party through the night.

Puerto Viejo has no sewage treatment center and relies on open drains to the sea. A life-long resident we spoke to the other day said, “There seems to be something in the air.”

It has been especially dry here for the past few months and I imagine Puerto does smell like a dehydrated latrine at this point.

Port also has no regular supply of drinking water. Instead people rely on rainwater catch or a miserable system cobbled together that regularly dries up after a week or two of no rain. Any added stress and the town runs out of water. Restaurants and no water to wash hands make for a bad combination, in my opinion. We don’t eat out often.

So, last weekend’s planned Arte Viva Festival was canceled after a court challenge, which left the municipality unable to issue permits for events. Good, I say.

It was this entry on the planned activities that I found the crux of the issue:

Saturday, Sept 26. 9:30PM-ON– everyone is invited to Jonhy’s Place to continue the celebration.

Jonhy’s Place is a bar on the beach. It’s had a less than stellar reputation in the past. It’s open most of the night.

You know… The Arts!