As long ago as the 1700s, fisherman plied the southern Caribbean waters because of the abundance of turtles that came every year to lay their eggs. These fisherman took the meat and sold the valuable shells. These would later be transformed into European hair brushes, combs, spectacle frames, guitar picks, and countless other items made from what we called “tortoiseshell.” 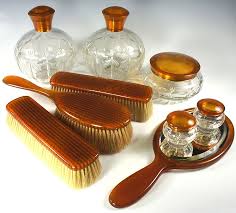 Sea turtles were hunted until near extinction, but, happily, they are making a slow comeback due to conservation and volunteer efforts. My old friend, John John, was a “turtle striker” in his youth, and he told me in order to land the monsters, he had to swamp his boat, lowering the gunnels into the sea, float the turtle inside, then bail the boat to raise it once again. 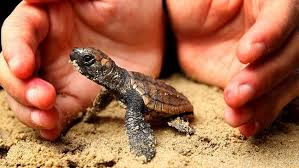 Many of those fishermen originated from the Bocas del Toro region of Panama, but paddled as far north as Bluefields, Nicaragua, when the turtle season was on— March through September.

They were Afro-Caribbean and Indigenous men , and they built provisional camps along this southern Caribbean coast line; they planted coconuts, yucca, yam, and other crops that would help them survive during the season.

Then, in 1828 one of these seasonal fishermen decided to settle permanently. William Smith, along with his family, settled at one of the camps located just north of the current town of Cahuita. I don’t imagine they had much when they first came. Perhaps their rudimentary huts looked something like this. 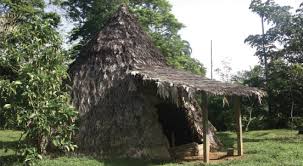 Other settlers followed: the Hudsons, who settled just north of William Smith; The Dixon family, who settled south of Cahuita; the Sheperds, in Puerto Vargas; Ezequiel Hudson and Celvinas Caldwell, both of whom chose to live at Monkey Point; Horacio MacNish, north of Old Harbour, and Peter Hansel, in Manzanillo. Many came with families, but others formed connections with indigenous people of Talamanca. Thus began an interracial population that is characteristic of this region. In fact, it’s fair to say that this coastline has the most diverse population of any part of Costa Rica.

These original settlers often settled next to small streams and creeks and those landmarks still bear their names. These pioneers also christened areas along the coastline with names like Little Bay; Hone Creek, whose name comes for the plentiful palm of the same name; Grape Point, where beach grape is plentiful; Manchineel, named after a huge tree of the same name that died back in the 1940s. Some of the names originate from the indigenous people. For example, Cahuita ( “where the Sangrillos grow”) ,and some are leftovers from another time: Old Harbour, from the pirate days and the likes of Horatio Nelson and John Davis.

Tourists who come to this area today are often confused because there are two and sometimes three names for locations along this coastline: Spanish, English, and the indigenous names given by the various ethnic groups in the area. 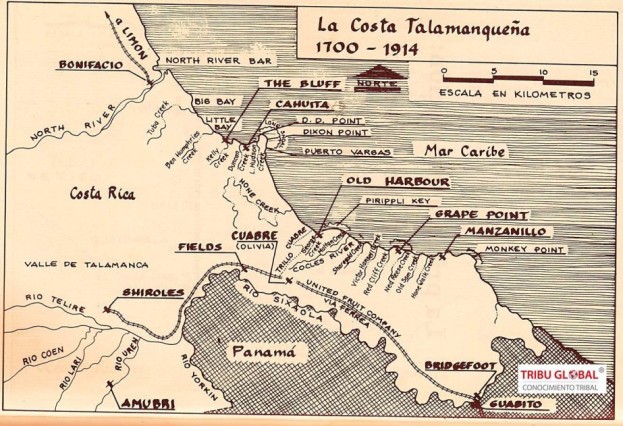 The original settlers were native English speakers, and in the map you can see the names of the landmarks as I knew them when my husband and I arrived in the late 1980s. As the area has gained notoriety, and Spanish-speaking Costa Ricans from the Central Valley have begun moving to the area, the names have changed to Spanish. But I like the old names, the Afro-Caribbean names.The REAL names.

And here is a recent tourist map. ¡Que diferencia!