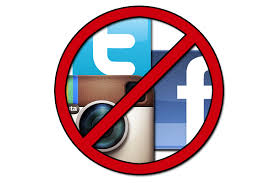 I signed out of Facebook on Monday after changing my password and pitching it. This is my third attempt to withdraw from the site. My first try involved deleting the app from my iPhone and iPad. That didn’t work because I soon realized I could just sign in using my phone’s browser, and I was back scrolling away. The second involved subscribing to Freedom.to and blocking out Facebook, Twitter, Pinterest, and other time wasters eight hours a day. Then I figured out, relatively quickly, that I could access FB by signing in using the password app on my phone to auto sign in through that app. Does anyone see a problem here?

I’ve read several books and articles on Facebook, Twitter, Instagram, i.e., social media, how the creators of those platforms knew they were creating something highly addictive and went ahead and did it anyway. It stokes our brain’s dopamine receptors in a way nothing besides opioids have been able to accomplish.

One of the books I read, Bored and Brilliant: How Spacing Out Can Unlock Your Most Productive and Creative Self by Manoush Zomorodi, cited studies showing that social media is changing the way we think and process information. Not for the better. People are becoming more distracted, less able to concentrate on in-depth articles or technical information, and generally, we are less logical. In my case, I began to think I couldn’t think at all. An author I follow said she began to notice that if she came to a place in her writing where she was stuck, she’d reach for the phone and social media. Avoidance and distraction.

So, Monday was my third try. I wrote to family and friends and told them if they wanted to get in touch with me they could Skype call or send an email. That was in the afternoon. Tuesday was really day one, and it wasn’t nearly as bad as I feared. There was a period in the morning when I usually sign in to post political links or just see what people are up to when I felt mildly anxious. I reminded myself that I had a life before FB and I could survive without it. I meditated and found the day opening up.

Tuesday is the day we see our chiropractor—miracle man, but that’s another post—so we drove to Limón for the appointment. I began to notice things and at first thought, Oh, I should post that. But then my inner voice said things like, Why don’t you write about these instead of instantly sharing everything? I took out my old writer’s notebook and jotted down my observations, like the line of bright red taxis at the grocery store, men pushing them into place to save gas as fares got picked up; three women calling Chances! Chances! Chances! as they waved lottery tickets at me when I passed their makeshift table; or the ragged homeless man in the market trying to sell some poor tourist’s bright purple suitcase, the airline destination tag, SJO, still strapped to the handle. In other words, life began to slow down, and my eyes became keener as I climbed off the hamster wheel of scrolling through never-ending posts.

It is true that social media is a useful organizing tool, and I think the Parkland school kids are doing a great job driving home their message of fewer guns and safer schools efficiently. Initially, I got on the daily posting routine because of the current administration. Last year I think my FB friends were organized and participating in the resistance, but I’ve felt more and more that people are just bellowing into the echo chamber. I think I can do more by blocking out the time I spent on social media to call and write legislators. believe me, I’m still getting the calls to action in my email app.

There are things I will miss: family and friends’ posts, writers, groups I’ve participated in, and a connection with people I felt living at the end of the road.

I’m shooting for an initial 10 days of cold turkey withdrawal. When I no longer think, Oh, I should post that, I figure I’m headed to where I want to be. They say it takes 60 days to form a new habit and falling back into old habits is easier than creating new ones, so…

I will be back at some later date, but only after I figure out how to make Facebook work for me rather than me being a slave to it. I’ll probably get more books read, too.

I grew up in Oregon and learned not everything is black and white. Now I live in the jungles of Costa Rica where the shades of gray cover the full spectrum. I shoot my mouth off on my blog, social media sites, and sometimes I get published. You can find my blog here: https://scmorgancom.wordpress.com/ View all posts by SC Morgan

13 thoughts on “Detoxing from Social Media”